As we mark Domestic Violence Awareness Month this October, I’ve had several opportunities to think about how we can all do better to support survivors of domestic and sexual violence and prevent these crimes from happening in the first place. I was glad to participate in the New Hampshire Coalition Against Domestic and Sexual Violence’s annual Hall of Fame Luncheon at the end of September. Every year, they honor New Hampshire residents who have gone above and beyond the call of duty in order to provide better support for survivors and work toward ending these horrific crimes. I’m incredibly grateful for their work, and for the work of UNH’s Prevention Innovations Research Center (PIRC) in preventing sexual and domestic violence on campus.

Since my time as a prosecutor and New Hampshire’s first female attorney general, I have met with stakeholders at all levels, and over the years the conversation surrounding domestic and sexual violence has evolved to grasp the fact that domestic violence is about power, and it’s a way for abusers to assert control.

There has been a collective movement to look toward more wide-ranging solutions to tackle the root causes of violence against women.

In the Senate, I introduced legislation that speaks to a certain aspect of domestic violence that has consistently been an issue, but never previously dealt with at the federal level. I worked across the aisle with Senator Gary Peters (D-MI) on the Pet and Women Safety (PAWS) Act (S. 1559) to address the existence of pets in situations of domestic violence, and how the bond between a victim and pet is often exploited by abusers in order to gain leverage in an already-abusive relationship.

In New Hampshire and across the country, crisis centers encounter tragic cases where abusers will manipulate their victims by threatening to harm, or intentionally inflicting pain on their victims’ pets.

By taking advantage of an individual’s love for their pet, abusers control victims by forcing them to choose either to leave their pets behind or stay in a dangerous situation that puts their safety in jeopardy.

Further, while a 2014 study found that almost 3/4 of pet-owning women seeking shelter at crisis centers reported that their abuser threatened, harmed or killed family pets, only a small number of domestic violence shelters permit pets.

The PAWS Act would take a number of steps to better empower women to leave abusive situations—and protect their pets and families.

The PAWS Act would expand federal law so that it includes protections for pets of domestic violence victims, and also strongly encourages all states to provide coverage for pets in protection orders.

Thankfully, more than 25 states have enacted similar legislation to safeguard pets in situations of domestic violence. But prior to the PAWS Act, federal legislation has failed to confront this issue.

Further, the PAWS Act requires convicted abusers to repay the full amount of victims’ losses for veterinary services needed for the treatment of their pets’ injuries.

Domestic Violence Awareness Month is a time to recommit ourselves to finding more solutions and work toward ending violence against women once and for all. I was proud to help introduce a resolution again this year designating October as National Domestic Violence Awareness Month, in support of advocates, first responders and victims who are deeply impacted by this terrible crime. But ending violence against women can’t be relegated to only one month a year. That’s why I’ve been so committed to fighting to pass a bill I helped introduce, the Campus Accountability and Safety Act (CASA), which takes important steps to prevent sexual violence on college campuses, support survivors, and hold colleges and universities accountable. You can learn more about this legislation and the other initiatives I’m working on related to preventing domestic and sexual violence on my website here.

I look forward to continuing my work to support New Hampshire’s advocates, crisis centers and important community resources, including PIRC. I’m going to keep fighting to get the PAWS Act signed into law.

Together, we can— and should—do better to prevent violence against women. 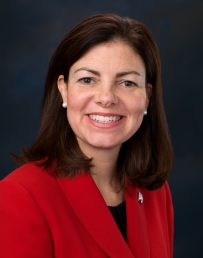 Senator Kelly Ayotte, a Republican, is a U.S. Senator from New Hampshire.